I am from the old iron town of Steyr, this is where I was born, this is where I live and work. I am already retired, in my active time I was a IT manager at the city council in Steyr. I am married and have two grown-up children.

My hobbies are traveling, hiking, table tennis and genealogy. I am especially interested in how to display a family tree on the internet.

How I came along?

Somehow I have a hereditary background, since my great-uncle, Dr. Richard Patscheider, was already involved in genealogy, family research, family trees and name research. I am in possession of 2 books - "from Oberrhein to Etschquellraum" (published in 1967 by publishing house Robert Lerche, Munich) and "von Sippenherkunft und Siedlerschicksal" (1959 Universitätsverlag Wagner / Innsbruck-Munich) both by Dr. Richard Patscheider.

In addition I want to mention the book by Josef Wopfner (National file of Innsbruck) "Family tree Patscheider 1550-1920" manuscript no. 3992 which was also a basis for my research. This manuscript was compiled by Josef Wopfner on the basis of the "Werfachbücher" of the district court Nauders 1547-1780, then on the basis of an excerpt from the matrices of the parish Graun in Vintschgau and various partly written, partly oral communications so about 1927.

A very extensive ancestor passport of my father Irimbert which completes and confirm above mentioned literature does also existing.

Based on these sources it was possible for me on the one hand to create a family tree of my ancestors, on the other hand I also made the effort to include all known descendants of this Claus Patscheider (born 1497 in Langtaufers) in a family tree. Although in this family tree only the males, respectively the bearers of the name Patscheider, were further traced.

On the other hand, I have tried to create a graphical and list-like textual representation of all my ancestors (in the chapter Family Tree - my ancestors).

Pedigree (direct line from Claus Patscheider to me):

The genealogical tree is stored in my PC and I use the program Kith&Kin. This program is not ideal, but much better than all other programs that I tested.

Naudersburg Castle is located in the village of Nauders, just north of the Reschen Pass. Since Roman times, when the Via Claudia Augusta was built here in 15-16 AD, one of the most important north-south connections in Central Europe has led over it. The German emperors' routes to Rome passed through here, especially in the Middle Ages, but the countless pilgrims of the Crusades also populated this pass road.

In the wake of the Frankish-Alemanic wave of settlement, the Patscheiders came to the valleys of the Tyrolean Alps between 1300-1500 and settled here at the Reschen Pass, especially in the adjacent high valleys.

Since the 10th century, this area of the Etsch spring has belonged to the Vintschgau and thus to the political nucleus of Tyrol. Count Meinhard II, who gave the Tyroleans freedom to defend themselves and bear arms, transferred the sovereign jurisdiction of this region to the fortified Nauder Castle in the 13th century. This Count Meinhard II was married to the widow of the last Hohenstaufen Emperor Constantine, and the Hohenstaufen heritage cannot be overlooked in this region. It is documented in the church patrons of St. Martin and St. Nicholas alone, and the Patscheider and Schuchter families are repeatedly identified as their benefactors and founders.

The old lion coat of arms from 1646 testifies to the importance of the Patscheider family for the court district, and in 1639 a chamois coat of arms is awarded "to the noble Gabriel Patscheider in Langtaufers court-appointed and his conjugal brothers for services rendered to Her Imperial Majesty the Holy Roman Empire and Most Serene House of Austria. In both documents, the feoffed persons are called "Gerichtsverpflichtete", which is roughly equivalent to the term "Erbrichter" (hereditary judge).

The documented family research did not get beyond the ancestor Claus Patscheider (born 1490). It is considered fairly proven that the Bavarian-Franconian immigrants founded the single settlement of Patscheid in the Langtaufer Valley at the same time as the nearby Gschwell, Grueb and Wies, in all of which there is evidence of Patscheiders until the 16th century. Even today, they still sit there between Mals and Reschen, close and firm on inherited soil. The history of this down-to-earth family gives the picture of a closed rural class. Lechthaler, Seyfahrt, Plöck, Federspiel, Maas, Plack, Plangger, Joss, Verdross, Mesener and Waibl - names of old Tyrolean families associated with the Patscheider.

The average number of children was seven, 2/3 were peasants, including the "court-appointed", 1/3 consisted of intellectual professions, of this third again more than two thirds were clergy, all this taken on average over four centuries, gives the overall picture of a healthy rural class, sufficient for itself and the cultural soil.

Many of our ancestors were born in Graun or Reschen (South Tyrol, Italy). Today's villages of Graun and Reschen, however, stand in a different place than the villages of that time. Therefore, it should not go unmentioned at this point that one of the main places of settlement (Graun) of our ancestors no longer exists.

In 1949/50, the villages of Graun and Reschen in the Upper Vinschgau (South Tyrol, Italy) became victims of a reckless damming project. The story of this lake damming almost reads like a thriller - but it is the story of a catastrophe. 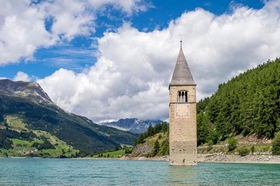 The tower as a memorial!

This homepage is a private homepage. It serves exclusively private and non-commercial purposes. Therefore it is not subject to the GDPR. Nevertheless, attention has been paid to data protection, privacy and respect for personal rights